In the original “Charlie Brown Christmas,” produced in 1966, our hero is surrounded by materialism and commercialism. He is told by a somewhat sympathetic Lucy that what he really needs is “involvement.” Would he be the Christmas play director?

Of course! But he is bothered by what the “true meaning” of Christmas is. After a few blunders and misunderstandings, Charlie Brown finally gets what he came for, the true meaning of Christmas, in Linus’s speech in the play:

“And there were in the same country Shepards abiding in

the field, keeping watch over their flock by night. And lo, the

round about them, and they were sore afraid. And the angel said

unto them, ‘fear not, for behold, I bring you tidings of great

joy which will be to all people. For unto you is born this day in

the city of David a savior, which is Christ the Lord. And this

shall be a sign unto you. Ye shall find the babe wrapped in

swaddling clothes lying in the manger.’ And suddenly, there was

with the angel a multitude of the heavenly host, praising God and

saying, ‘glory to God in the highest, and on Earth peace, good 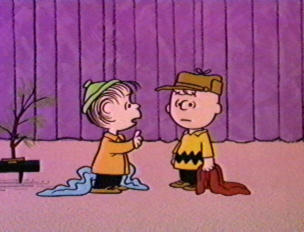 The show ends with the cast caroling, “Hark the Herald Angels Sing,” a decidedly Christian and joyous song.

If a group of public elementary school children wanted to produce such a play today they would be told “no.” The reason may be because it’s wrong to exclude other religions in favor of another. Or, we can’t talk about God or Jesus in school.

The First Amendment to the Constitution of the United States in no way, shape or form, either expressly or implied, even suggests that such a play would be against the law. In fact it implies the opposite.

The only thing such a play would be against is the politically correct myth people have come to call “separation of church and state.”

There was never any such intent among the framers and founders of our great Judeo-Christian nation.

In fact, the intent was to prevent a repeat of the Church of England, which dictated religion to the people. In America we have freedom of religion, which shall not be abridged.

Respecting no religion means the government shall not dictate a religion. The law was meant to keep government out of religion, but never to keep religion out of government or anything else.
Photo Credit: AP
Photo Credit: AP
By current standards “In God We Trust” could be struck from behind every U.S. Federal Court bench and from our currency. And “under God” could be removed from the Pledge of Allegiance. A religious invocation could be discontinued before every new session of Congress, and the paid U.S. Chaplain dismissed.

What is it about at the very least good guidelines for life, being outlawed and vilified? Where has the nation, founded on Judeo-Christian ethics gone wrong?

Fewer and fewer of our leaders and icons are outwardly religious. More and more intrusions on our sectarian lives are made by commercialism and anti-religious sentiment.

Christmas has been hi-jacked by our capitalist greed.

It’s not enough to put Christ back in Christmas. We want our children to be exposed to the values and principles of the Judeo/Christian ethic at school, where they spend the majority of their weekday waking hours.

If my fourth grade son’s teacher can give him what amounts to hours of homework every night, then the school should allow a few minutes of what I want to go on there. Such a prayer, a moment of silence, a gathering of children singing Christmas carols. I am so sick and tired of “winter concerts,” with “snow” songs and cover-ups of the real reason we celebrate this time of year.

Or are we too far gone? Have we lost the spirit of Charlie Brown’s Christmas?

I hold dear the Christmas stories of my mother, who grew up on a farm in Southern Wisconsin. If a child got one hand made toy or gift at Christmas they were fortunate. The real prize, my mother told me, was an orange.

Think about that for a moment. An orange.

Having family all together wasn’t much of an issue in the late 1940’s and 1950’s. Most families and extended families shared a home or farm house. Now we are spread from sea to sea with rarely a moment to even call or email.

Our lives are so busy that even sports and other activities are taking over the traditional day of rest, Sunday.

When the first Chick-fil-A restaurant on Long Island, New York, opened up recently a few miles from my home, people did not believe it was closed on Sundays. Why? So that employees had some predictable family and rest time, and “worship if they choose to.”

My oldest son works Sunday mornings and afternoons at a competing restaurant, and it breaks my heart that he doesn’t come to church with us anymore because of it.

Something has to change. Someone has to stand up for what I believe is the silent religious majority, and then tell everyone we can pray in school again. That we can sing Christmas carols in class and in the CHRISTMAS concert.

If we could fast forwarded the Peanuts gang to 2015, I think they would clandestinely produce a Christmas play on the village green, pass out oranges, and they would all work at Chick-fil-A.