President Donald J. Trump has said “We are fighting sneaky rats right now that are sick and demented,” “We’re going to win,” and it would be “fine” if US terror suspects were sent to the U.S. military detention facility at Guantanamo Bay, Cuba, for trial.

One of the President’s first actions then should be to shred the 2009 Military Commissions Act and then proceed using the military commissions’ guidelines from Army Field Manual (FM) 27-10 (a.k.a. The Law of Land Warfare), which is the U.S. adaptation of the Geneva Conventions. By that law, those accused of committing war crimes would receive the SAME rights as U.S. soldiers covered by the Uniform Code of Military Justice (UCMJ). This would be fair, just and speedy.

Currently, the Military Commissions Act of 2009, hastily written by then President Barack Hussein Obama and Department of Justice head Eric Holder, and then passed by a Democrat majority Congress, gives detainees accused of war crimes virtually the SAME rights as you or I would enjoy in a Federal court of law. Outrageous!

According to FM 27-10 and Geneva, by NOT following the rules for lawful combatants, unlawful combatant detainees actually earn ZERO extra legal privileges. That’s why these detainees are not considered Prisoners of War, they didn’t EARN the status, which carries many privileges. 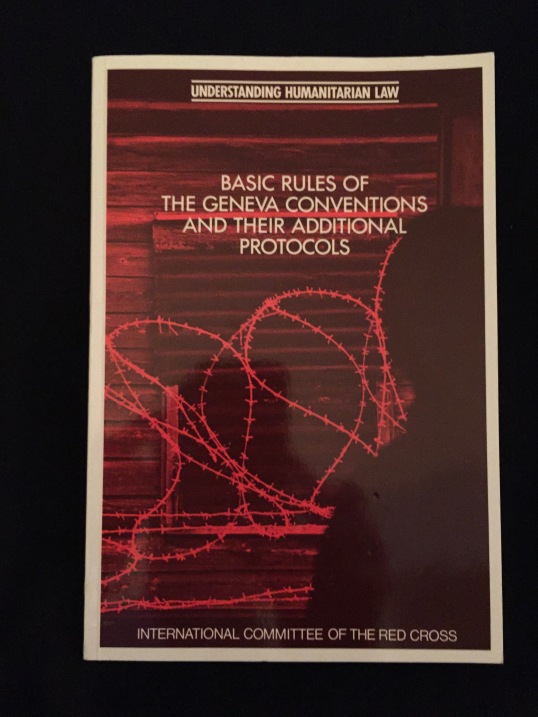 In 2009, Congress provided these Islamists-who-want-to-kill-us with the full blessing of the “lawfare” they were seeking. Captured al Qaeda training manuals we read at Gitmo back in 2002, identified strategies the “Brothers” should use if captured. “Lie about your treatment.” “Claim you were abused and tortured.” “Demand a lawyer.” The bad guys know that once allowed into the American justice system they could use lawfare to their advantage and either delay punishment, or get early release. Both have come to pass for virtually all detainees.

In WWII six of eight German saboteurs caught dry foot on U.S. soil were executed within eight weeks of their capture. They had hurt no one, nor had they destroyed any property. However, they were not wearing uniforms, did not carry their weapons openly, and had the means, motivation and intent to kill Americans and to destroy U.S. property. Two of the eight captured saboteurs flipped on the others and were spared the electric chair. 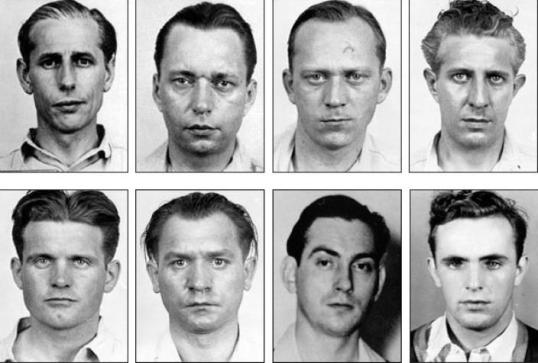 Remember, those six German saboteurs who were executed had not hurt a fly nor blown anything up. They were deemed spies and in violation of the Geneva Conventions. After being denied habeas corpus, they were tried by military commission unanimously approved by the U.S. Supreme Court. Spies caught on the WWII battlefield could expect summary executions ordered by field grade officers and above. Every detainee brought to Gitmo could have been lawfully shot dead on the battlefield.

Instead, they were taken to Gitmo for interrogation to “obtain valuable information” that would “save many lives,” according to President George W. Bush, in his memoir, “Decision Points.”

What’s different now? Why did we release at least 730 known/suspected terrorists? Why are we allowing foot dragging in the court room? Why are we allowing religious garb, prayer time, Qurans, prayer rugs/beads, directions to Mecca on guard towers, use of U.S. military chaplains, halal and special holy holiday meals to known enemies?

The moniker “Club Gitmo” certainly applies. In the early days, when I was the ranking U.S. Army Medical Department officer with the Joint Detainee Operations Group, Joint Task Force 160, tasked with overall monitoring of bad guy and good guy care, I was appalled at the difference between how we treated the detainees medically and how we treated our own soldiers. The detainees had immediate and full medical attention and care. Daily visits from an Army medical Non-Commissioned Officer, who collected medical intelligence that I would scrub and then utilize for reports to the Army incarceration command and Navy medical command, provided insight into how the enemy was trying to take advantage of the system.

In the end, each detainee received the highest quality medical care available in the U.S. military. If a specialist or special equipment were needed, they would be flow in from the States. If U.S. personnel required specialized treatment, they were sent home, a medical re-tread.

Sick-call for detainees was 24/7/365. All they had to do was cry and complain about this thing or that and then ZIP! Into the internal medical facility. Signs and symptoms of an illness or disease and BINGO! Off to the JTF detention medical facility. All air conditioned, and doting-over by Navy medical personnel who did not leave their bedside manner at the door. 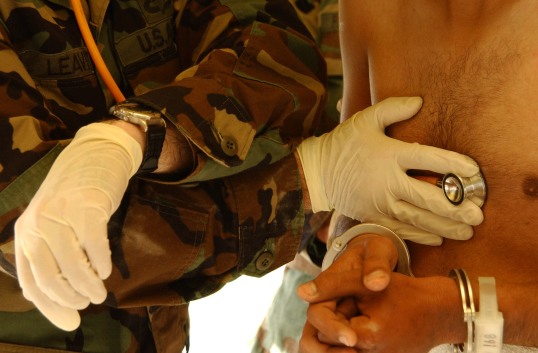 If U.S. military personnel needed medical attention they could NOT be taken to the Naval Station GTMO medical facility (Navy Hospital), which was reserved for permanent party military and civilian residents. JTF personnel had to first see their organic unit medical personnel (medics), then wait to see someone with more medical expertise if necessary and available. Most U.S. personnel could not find adequate transportation to take them to an authorized medical facility, as most Army units guarding the detainees had to leave their organic vehicles behind in the continental U.S. Many walked or had to take the base shuttle bus, sometimes waiting hours between buses.

This doting behavior towards detainees must stop. Detainees should never receive better care than our own troops. The goal was of course to keep them alive, but the pandering and doting was difficult to witness.

Now, the detainees are allowed to wear white robes and long beards. In the beginning, for hygiene reasons, all detainees were clean shaven and had shaved heads. I think we need to go back to orange jumpsuits and no beards or head hair. It’s cooler in the hot climate of the Caribbean and more fitting for unlawful combatant Islamists who want to kill us.

President Trump, who said he would fill Gitmo up “with some bad dudes,” could turn all of this around. He now has the chance to get it right. Let’s hope and pray that he does.

As sure as Casey Jones perished in a pile of smoke and broken steel amid the flame and fury of a head on collision between two burly and brave locomotives, President Barack Obama and President Elect Donald Trump are bearing down for a modern version of that fateful clash. 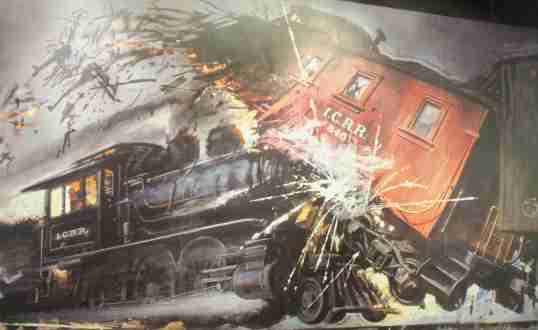 “There should be no further releases from Gitmo,” Started the determined Tweet. “These are extremely dangerous people and should not be allowed back onto the battlefield.”

With this pure and logical Tweet, almost as if on cue, the President Elect seemed to be responding to an editorial by the Washington Post earlier in the day, calling for him to close Gitmo.

His response? In your face.

Even more, it is finally a direct challenge to the President regarding his failed policy of releasing unlawful combatant Islamists back into the Global War on Terror.

According to the Director of National Intelligence, 30 percent of released detainees have returned or are suspected to have returned to the fight. And what about the other 70 percent we don’t know about, where are they?

Everyone except the President and his floundering administration knows that releasing dangerous terrorists into a world plagued by terrorism is not in the best interests of the American People, or anyone for that matter.

For a President Elect who ran on and has repeated his top priority of “America First,” his Tweet about not releasing more detainees is consistent and shows the courage of his convictions.

The President Elect has now done more than any other person, in government or out, in the last eight years to challenge and put the President on notice over his catch and release policy with regard to emptying Gitmo, most recently of the “worst of the worst,” as labeled by Donald Rumsfeld back in 2002, when Gitmo opened. These men are dyed-in-the-wool terrorists, highly trained, skilled and committed to killing innocent people of any race, age, gender or nationality.

Recently, President Obama announced the probable release of up to 22 more detainees from the U.S. military detention facility at Guantanamo Bay, Cuba. This prompted a few outcries from this law maker or that, but nothing seemed to get the President’s attention regarding the fact that we are still at war, and that releasing our enemies while that war is hot is at worst treasonous, and at best pretty damn stupid.

The gloves are off, the face slapped and the challenge laid bare. The President can run, but he cannot hide from this test of manhood made in a simple Tweet. He must face the issue or move along quietly into private life and then leave the Big Boy issues to the Big Boys.

Sending Josh Earnest to deal with this one would be inadequate, even for Barack Obama. He has got to respond, and respond in a positive way or risk any shred of rationality left in his now fast crumbling presidency.

When the President responds, he must do so without the tired and false narrative regurgitated one more time in the Washington Post article. There is no “international outcry” to close Gitmo. Gitmo has never been used by our enemies as a recruiting tool, and the Administration has never once provided evidence of this claim. There is not nor has there ever been systemic torture or abuse at Gitmo, and calling the approved and legal enhanced interrogation technique “waterboarding” torture is a lame liberal after-the-fact label that just won’t stick. The fact is that there is no moral comparison between Gitmo and how our enemies treat captives.

Waterboarding works, and maybe it saved your life. Just ask Khalid Sheikh Mohammed, mastermind of the September 11, 2001, attacks, whether or not it is effective, and whether or not he is none-the-worse for the wear.

No, Barack Hussein Obama must for once stand up, look Donald J. Trump in the eye, and then respond to this challenge of character. The same-old, same-old responses didn’t work eight years ago when he promised to shut Gitmo down, and they are not going to work now. He must capitulate.

Unfortunately for us, the President’s modus operandi related to challenges of his failed policies are either to ignore them, lie about them, or double down and make the whole damn thing worse.

Like Barack Obama’s apology tour, red line in the sand, Benghazi lie, trading terrorist leaders for an Army deserter, calling terrorism in the US “workplace violence,” “no boots on the ground,” “overseas contingencies,” “the Global War on Terror is over,” Gitmo is his failed crucible. He will die on this hill as sure as you’re reading these words.

The political world of Barack Hussein Obama is falling down, has run its course, is absent of any credibility.

Unlike Casey Jones, who piloted his locomotive to the bitter end in order to save lives, knowing it would kill him, President Obama will almost certainly jump from the train in an effort to save his own skin and fight another day.

Rumors of the President working to establish a “shadow government” upon his exit from the Presidency in just several days is both typical of his personality and fateful for his legacy. One last temper tantrum from the man who could never get out of his own way because of failed liberal beliefs, he will disappear into the twisted wreckage of his tenure as our Chief Executive, and it appears that President Elect Donald Trump is going to make sure of it, Tweet by blessed Tweet.