Never let it be said that we stand by and watch our comrades in arms struggle when we can give a helping hand. As military men and women, we have a common bond, and although we’ve not always been best of friends with the British, this time of year makes us reflect on our comradeship.

Therefore, I would be grateful for all my brothers and sisters at arms out there to please join me and help keep the legacy of a local World War I hero from being desecrated by a government council in Scotland.

Captain Ralph Hudson died 99 years ago, but there is no eternal peace for him after an unbelievable decision was made on the eve of Remembrance Sunday*. Now it seems that this Duke of Wellington Regiment’s soldier has one more battle to fight . . . from beyond the grave.

As part of his legacy, trustees for Captain Ralph Palliser Milbanke Hudson’s estate, left a piece of land to his local church to be used for burials of resident parishioner’s at no cost to them, but Scottish Borders Council (SBC) have just stopped the practice of free burials which first began in 1925.

Buried alive while marking for the Artillery opposite Messines in 1915, Captain Hudson suffered horrific injuries after surviving the German shelling and gassing.

Five years later, he sadly succumbed to his injuries and the Wolfelee estate between Jedburgh and Hawick bequeathed land to Hobkirk Parish Church in 1925 in his memory, which would enable local parishioners to have free burials.

There are around 60 plots left in the cemetery extension at the church, but the Scottish Borders Council has slapped funeral charges of up to £1000 on future burials; a move which has provoked anger among locals.

One of the locals who now lives on the estate is author and journalist Yvonne Ridley. You may know her as a former captive of the Taliban back in 2001, but she has also served as an officer in the Territorial Army.

She said, “I’ve looked in to Ralph’s family history and he was born in the same county as myself. We both served in the military as Captains, although thankfully, I saw no action unlike Ralph, and we both ended up living in the same house albeit a century apart.

“He, like me, valued the people in his adopted community in the Scottish Borders and his legacy should be preserved. I’m not even sure what the council is doing is legal and once we find the original documents or copies relating to the deeds we will prove this.

“I believe we have right on our side and if this council wants a battle then it will get one. They should remember the ‘Dukes’ motto: Fortune Favors The Brave!

“There will also be US soldiers reading this who are just as angry as me and I would ask for your help. Of course, the decent thing for SBC to do would be to capitulate and honor Ralph’s memory and legacy. This is, after all, the month of November when we remember and honor our war dead.

“Perhaps this is something the council bureaucrats would do well to remember.”

Before his death, Captain Hudson wrote a book on the history of Wolfelee, published by his family after his demise.

A preface to his History of Wolfelee says, “He was buried by a German shell whilst marking for the Artillery opposite Messines, and never really recovered from his injuries, dying from heart failure on March 25, 1920.”

SBC remains unrepentant. A spokesperson said after a council review in 2014 the authority saw that “Hobkirk was recognized as having been providing burial ground without a charge.

“The premise on which the ground was being given free was researched, including scrutinizing titles, historical records and Council-held files.

“What was established was that there was no legal basis on which the ground was being provided free of charge and that the Council was entitled to charge for the purchase of burial plots within Hobkirk.

“Charging was implemented at the start of the 2015/16 financial year and the rates are reviewed and updated annually as part of the budget setting process.”

However, campaigners say they are more determined than ever to get justice. Ms. Ridley added, “We are taking legal advice and will continue our fight for Ralph’s legacy.

“The council may want to forget all about the heroics of Captain Hudson but we will not and neither should parishioners because they have to walk past his grave for Sunday worship every week. 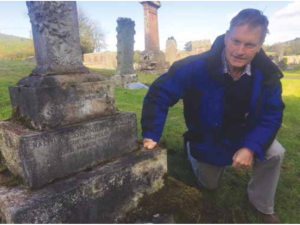 “We will definitely be planning a fitting memorial to mark the centenary of his death and expect it could turn in to quite a significant event. Hopefully SBC will re-think its policy on this occasion and do the right thing.”

She urged anyone who wants to support Captain Hudson’s legacy should write to SBC’s Chief Executive Tracey Logan at her email address (Tracey.Logan@scotborders.gov.uk) and urge her to overturn the council’s decision to trash Ralph’s legacy.

Captain Hudson was born in October 1891 in Sunderland, the only son of Ralph Milbanke Hudson and Eliza Westropp Hudson. After graduating from Cambridge, he was commissioned into the West Riding Regiment as a 2nd Lieutenant. The regiment was also known as the 3rd Duke of Wellington’s.

That year he went on active service to France in January 1915, but, in the same year, was invalided home after being shelled, gassed and temporarily buried alive.

He published a book of “Trench Yarns” under the pen-name “Peter” as well as a History of the Hudson family home, Wolfelee, published posthumously.

He married Annie Charleston Goninan at Hobkirk in 1918 but never recovered from his injuries, dying from heart failure two years later.

Editor’s Note: If you are interested in helping the campaign to preserve Captain Hudson’s Legacy or have more information about him please contact the author. There will be a wreath laying ceremony for Captain Hudson a few days ahead of Remembrance Sunday.

*Remembrance Sunday is held in the United Kingdom as a day “to commemorate the contribution of British and Commonwealth military and civilian servicemen and women in the two World Wars and later conflicts”. It is held at 11:00 a.m. on the second Sunday in November.