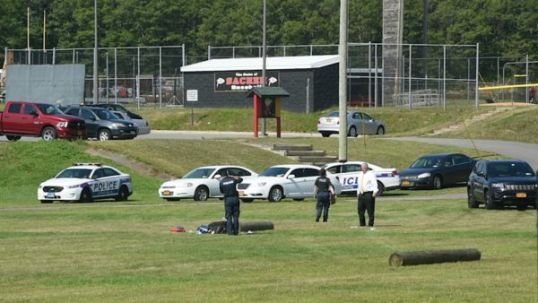 Very recently in my community there was a tragedy on the high school gridiron. A 16 year old high school junior, attending an off season football strength and conditioning camp, was struck in the head while participating in a Navy SEAL-like teamwork, strength and endurance drill with a 10 foot long “telephone pole” type wooden log.

There are few specific details publicly available, only that it happened while five boys, including the victim, were participating in the drill and that the victim was said to be in the middle of the group and the boys were raising the log over their heads. Was the grass wet? Did the boys lose their grip?

In any case, the boy was struck in the head during the morning workout. He was pronounced dead at a local hospital. The same hospital where all five of my children were born, now ages 21 – 8.

“Can you imagine,” my wife said after learning of the tragedy, “dropping your child off in the morning at a place you would think he would be safe, and then getting a telephone call that he had died?” I cannot.

This part of Long Island is no stranger to high school football fatalities. Less than three years ago another young man, who was playing in a local regular season high school football game collided with an opponent, head on, collapsed and then died from his head injury.

As a former football player and athletic administrator, I can tell you that head injuries and injuries in general are a painful reminder that we can never be “too safe.” I remember vividly a rainy night football game played on natural turf, where the field conditions were less than desirable, and within five minutes of each other two players were removed from the field with broken bones. It happens that quick, and without warning.

But there is something different about this fatal injury.

The Log Drill is a series of physically, mentally and emotionally challenging maneuvers in which a team of about five men perform these drills with a log weighing approximately 400 pounds. If everybody does their share, that’s 80 pounds each.

Yes, these are strapping young men, strong, with endurance and fortitude, being taught how to work as a team, the hard way.

As an athletic administrator for public school programs on Long Island, I emphasized to coaches that the student athletes who chose to participate in their programs did so because they enjoyed playing the sport. I told the coaches that it was vital to remember that their student athletes were kids and not adults, no matter how much like men they looked, and not to treat them like college or professional athletes. It would have never occurred to me to tell them not to treat them like elite warriors.

In the professions of physical education and athletic coaching safety must always be the first consideration. Physical educators are trained to always inspect the gym or teaching space and the supplies and equipment to be used prior to teaching their lesson. Good coaches do the same. But at what point does common sense kick in? At what point do you say to yourself, “Gee, I wonder what would happen if one, just one of these boys slipped and the 400 pound log came crashing down one of their heads?”

We call what happened a “tragedy” because it is a classic example of what a tragedy is. Some call it a “tragic accident.” Some will call it negligent. And that will be for the police and lawyers to figure out. But those of us with military experience (I served 22 years in the Army, as an enlisted Combat Medic and then as a Medical Service Corps officer) know that a dead soldier is an ineffective soldier. So we teach and train safety first, especially out of the combat zone. In the combat zone, we say “Mission First, Safety Always!”

As soldiers, we knew what we did was inherently dangerous, and could cost us our life, limb or eyesight. But in a civilian setting, where children are involved and looking up to and trusting the adults around them who are legally in loco parentis (“In place of the parent”), to keep them safe and healthy as a parent would, my opinion is that there is never an excuse for potentially putting their life at risk for the purpose of team building, conditioning or any other reason. Nothing we do as adults responsible for the health, safety and welfare of a child should ever potentially cost them their life.

Coaching egos and over training have taken the place of always doing what’s in the best interest of the student athlete. We allow false dreams of college and professional success and fame to cloud better judgement as more and more youth’s who participate in athletics are tracked to one sport over another, with year round training and travel leagues. Less than 1 percent of high school athletes ever play on a college scholarship. Less than 1 percent of college players ever play in the pros. And the average career in the pros lasts only from 3-5 years.

Football is the modern equivalent of war in the minds of some. We “Fight, fight, fight!” “Kill, kill, kill!” “Rip ’em apart!” Believe me, when General George S. Patton, in a speech to his troops during WWII implored his men to grease the wheels of their tanks with the guts of the enemy, he wasn’t talking to teenagers preparing to play a game.

The rhetoric and techniques used by youth coaches need to be developmentally appropriate. I’ve had coaches disciplined for inappropriate language, tobacco use and other behavior detrimental to the proper development of young student athletes, yet on any given day you could walk through even a youth league practice and shouldn’t be surprised the hear things that would make your mother blush.

Foul language and Navy SEAL drills don’t grow hair on the chests of young men. Using fun cooperative games, sports and activities leads to better teamwork and leadership skills than making them put a 400 pound log over their heads.

Youth leaders need to work smarter and not harder. Even the pros are reconsidering bulk work outs in favor of resistance training. Lean core fitness, speed and quickness drills, push-ups and sit-ups yield a far healthier and effective student athlete than over-working bodies and muscles to the point of musculoskeletal failure or injury. Form is more important than weight. When the body is tired and fatigued it is most susceptible to injury. Why didn’t these “coaches” know this?

Last few points. In a local front page news article about this tragedy, public school athletics officials were quoted as saying there was “only one out of season practice rule” for interscholastic student athletes, that they not be forced to participate in out of season activities. That is in fact only half of the regulation. The other half is that out of season workouts need to be open to anyone.

This is from the New York State Public High Schools Athletic Association (NYSPHSAA), Inc., Bylaws and Eligibility Standards, page 130, Section 22. (NYSPHSAA is to governing body of New York State public high school athletics and is affiliated with the National Federation of State High School Athletic Associations (NFHS); the local governing body in Suffolk County, New York, where the tragedy occurred, and which answers to the state association is Section IX).

(Corrected from 8/12/17 version.) So a “non-school sponsored activity” (the strength and conditioning camp that contributed to the death of the 16 year old) can be mandated through a booster club, by non-affiliated coaches and trainers – just not the actual team coaches.

This off season work out had nothing to do with the school district’s official activities. The booster club sponsored the activity. According to the article, each boy had to pay $325 for the camp. Since it was “non-curricular” the state law (New York State Commissioner’s Regulation 135, Guidelines for the Coaching Requirements, pp. 48-73) requiring coaching certifications for anyone working with the student athletes in a scholastic setting didn’t apply. There could be any nut case working with these boys who were hired by the booster club. And oh, by the way, the bulk of that $325 went to salaries for these fitness and conditioning “specialists.” These things you won’t find in the article.

Public school districts need to take a hard look at what activities they allow on their premises, and booster clubs need to hire licensed teachers and coaches for their extra season camps if they are going to use school facilities.

After this tragedy, if this was the case, there is no excuse for allowing non-certified coaches/trainers to work with public school student athletes, ever. If a parent wants to seek out a “professional” trainer for their child on their own, that’s their business, but for public schools to allow and facilitate it is unconscionable. If a “trainer’s” only qualification is that they were a Navy SEAL, or college or professional athlete, an alumni perhaps with no other proper coaching qualifications or certifications, take a pass. No disrespect intended.

Intentions aside, without the proper training and coaching style, it’s only a matter of time before tragedy or negligence strikes again.

10 responses to “Tragedy on the Gridiron”